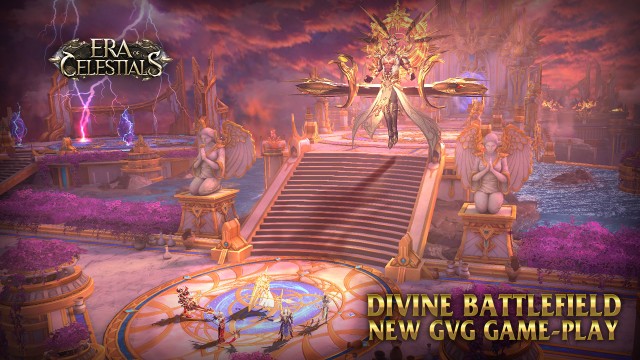 Once upon a time, there is a wonderland called Domain of Divinity, which is the origin of ancient Elysian. It’s beauty and mystery attracted adventurers from all over the world. According to the legend, the place contains countless wealth and the power dominating the world, while no one has found the core of Domain of Divinity. Some people came for the power, some people came for the wealth, some people came to prove themselves… Now all of them gather at Divine Battlefield and get ready to show off what they got.

Upon the Domain of Divinity Battlefield, the world's servers will be divided into four factions to wage war upon each other. A player's faction depends on its legion's faction.

The Domain of Divinity Battlefield contains Daily Battlefield Quests and Timed Battlefield Quests. Daily quests require you to play daily game modes or to complete certain quests at the Paramount Divinity map.  Timed quests can only be completed within the timed game mode available daily between 12:30 PM - 12:45 PM and 18:30 PM - 18:45 PM.

Timed quests include Battlefield Gathering and Divine Command. Once the Battlefield Gathering is available, players may enter the map by themselves to gather collectibles of various rarity upon the map. Carrying a collectible grants the player and their faction Battlefield Points, but they will drop it upon death. Killing monsters within the instance also grants points. The faction which first reaches the point objective during the allotted time wins. If no faction reaches the point objective during the allotted time, the faction with the most points win. Once the Divine Command is available, 5 bosses will spawn upon the map. The first player to attack a boss will gain its loot upon the boss' death. However, if that player is killed, their killer will instead gain the boss loot. Bosses also come with other rewards; upon the boss' death, participants will obtain a participation reward. Remember, leaving the boss area for any reason will remove you from the loot list!

Battlefield Points gained by players within the Domain of Divinity will be added to their faction's total points. Once the Domain of Divinity Battlefield results are tallied, rewards will be issued according to faction ranking and according to a player's rank within their faction. The players within the rank 1 faction each week will be granted an additional faction reward.

Domain of Divinity Battlefield is available Mondays to Fridays and the results will be tallied on Saturdays at 5:00 AM. Take note of the availability period so as not to miss it.

During the event, if you change faction, or if the Legion Commander changes faction, all personal points will be reset to 0. Only make the choice if you are certain!

Kill monsters and collect the drop

1.     Each member will be awarded a reward according to the rank of the faction.

2.     All members of ranking 1 faction will acquire an except reward.

Then all you need to do is choosing a faction to join and collect points as much as possible. Participators can gain rewards by killing monsters and occupy altars. The players were killed can resurrect immediately. Kill and take are the only rules. The Divine Wonderland became battlefield eventually, it will never be peace and quiet again unless the chosen one show up and end the chaos. But who will be the chosen one eventually? We will see.